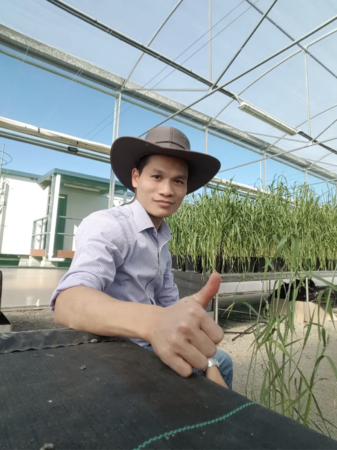 During his PhD study, Dr. Hoan X. Din made a research breakthrough that found and defined the sequence of an important gene underlying leaf rust resistance in barley. His findings could make a significant contribution to protecting barley crops from disease across the globe.

Dr. Dinh’s PhD, ‘Molecular genetics of barley (Hordeum vulgare): Leaf rust (Puccinia hordei) interactions’ was undertaken with the Faculty of Science at The University of Sydney.

His research focused on identifying the genetic sequence of the barley leaf rust resistance gene Rph3 and examining how the gene works to protect the host from leaf rust fungus. Characterising the unknown resistance to leaf rust fungus in a barley breeding line was another a key focus.

Rust is significant problem for the farmers across the globe. The disease-causing fungus afflicts different cereal crops, decreasing food production by at least 10 percent.

The use of resistance genes for barley and wheat species is considered the most cost-effective and environmentally friendly method of preventing rust outbreaks. As estimates published by the GRDC suggest that genetic resistance saves Australian wheat and barley growers more than $1 billion every year, Dr. Dinh’s findings could make a significant contribution to the fight against the disease and assist in securing global food security.

Dr. Dinh was supervised by Professor Robert F. Park, a global leader in rust research from the University of Sydney’s Plant Breeding Institute, who praised Dr. Dinh’s work and the significance of the research.

“Hoan undertook painstaking work over three years to isolate the gene from the barley genome, which is about the same size as the human genome. He found that the Rph3 gene is a new class of resistance gene in plants generally, which has led our research in a new direction that we think will advance rust resistance,” Professor Park said.

According to Dr Dinh, finding the sequence of resistance genes will speed up the breeding process via Marker-Assisted Selection (MAS). This is a key precursor to proposing viable strategies to gain durable resistance to the disease, “The known sequence of the gene is indispensable for applying gene-editing techniques like CRISPR-Cas9,” said Dr. Dinh. 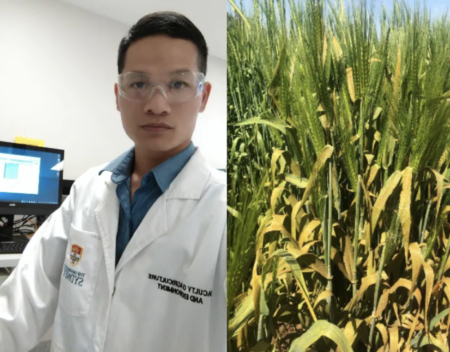 The results of his PhD research were so unexpected that Dr Dinh initially thought there was an error. “When I first found the gene, I was worried I had done something wrong because it was so unusual,” he said. Those feelings were quickly replaced by astonishment and excitement.

His research findings were ultimately published in Nature Communications. “The novel findings gave me a golden opportunity to conduct further studies and publish our results in a high-impact journal,” said Dr. Dinh.

The publishing process will also likely provide other networking benefits. “Publishing during candidature may give me chances to collaborate with leading agricultural scientists worldwide, which will be the precursor for my future contributions to agricultural production,” he said.

Dr. Dinh found his graduate research journey highly fulfilling. “The acquired knowledge, skills, and established collaborative network are the best rewards for my PhD,” he said.

His supervisory team provided constant support throughout, “Undertaking PhD study requires extensive knowledge and advanced techniques that may be challenging for any PhD candidate, including myself. However, I discussed the research plan, the progress, and the difficulties with my supervisory team. As a result, my PhD study went smoothly and generated excellent outcomes,” he said.

Originally from rural Vietnam, Dr. Dinh obtained an AusAID scholarship (now known as the Australia Award Scholarship) and moved to Australia to undertake his PhD. He hopes his research will have positive impacts for agricultural practice in his home country and the broader region.

“I hope the general principles in my PhD projects can be applied to the main crops grown in Vietnam to protect the harvest. The outcomes of my PhD projects may also inspire more and more Vietnamese young scientists to contribute to the development of Vietnamese agriculture,” he said.

Following the conclusion of his PhD, Dr. Dinh was offered an award to work as a Postdoctoral Fellow at JIRCAS, Japan. The team’s current project focus on isolating the gene promoting plant growth and enhancing grain yield in soybean. After finishing the current program, he aims to continue his research on the host-pathogen interactions at the molecular level in Australia. You can read more about his research at https://orcid.org/0000-0001-6442-0416

#HDR #Writing #Tip: Be committed! Book space in your diary to write & make it non-negotiable. Shutdown your email, remove any distractions – you’re there to #write. Be prepared: have your coffee ready, your drink bottle full, & don’t forget your charger! #TisTheSeasonToBeWriting